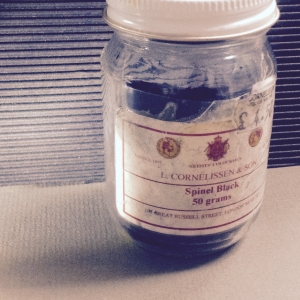 On the subject of painting Sir Winston Churchill once said:  “At one side of the palette there is white, at the other black, and neither is ever used neat” (https://winstonchurchill.org/the-life-of-churchill/life/artist/painting-as-a-pastime/).

Painters have long been told to avoid straight-from-the-tube black or to use it most sparingly. While this conventional advice remains sound for many practitioners, artists of this century continue to challenge, reject and even massacre things conventional.  Gone too is the image of the artist working in stoic isolation (though in reality many still do, like it or not).  Large scale public art projects have made art into a team sport by necessity.  Scientists and others from what were once regarded as distinctly different areas of endeavour are now routine players on team art.

Years ago I was intrigued to learn of the once “blackest black,” an artificial mineral pigment called spinel black named after the natural mineral spinel.  It was said to be the pigment used to coat stealth bombers.  As a paintings conservator I’ve yet to require an ultra deep black for colour matching, but out of curiosity I purchased a small quantity from my favourite London artists’ colourmen, L. Cornelissen & Son.

Fast forward to 2019, the year that MIT engineers developed a blacker black with only 0.005% reflectance of incident visible radiation, or to put it another way, a material that absorbed 99.995% of visible radiation aka “light” (https://news.mit.edu/2019/blackest-black-material-cnt-0913).

From a first glance at the press release, one might conclude that this material represented an entirely new technology, but carbon nanotubes were first identified in the early 1990s. Subsequent innovations have been in the particular way the superfine nanotube particles are created, and hence the extent to which light is absorbed.  Black is not a colour per se but a substance that absorbs light, however black pigments available to artists reflect a small percentage of light.  Carbon nanotubes reduce this percentage to minuscule levels.

An earlier innovation, “Vantablack” (vertically aligned nanotube array) with its 0.035% reflectance was developed in 2014 by Surrey NanoSystems, UK. Anish Kapoor outraged the art world by striking a deal for his exclusive use of Vantablack. Social media was littered with objections, some hostile, and a seemingly irresistible urge to take a pop at Kapoor persists.  A 2016 fake news piece saw Kapoor’s monumental 2006 sculpture Cloud Gate with its famously reflective surface disappear in a shroud of Vantablack.

But then along came Vantablack Vbx2, also produced by Surrey NanoSystems and so went Kapoor’s short-lived monopoly of the blackest black.  Vbx2 was utilized by architect Asif Khan for his 2018 winter Olympics pavilion in Pyeongchang, South Korea.

Vantablack Vbx2 is used in the automotive industry. Incidentally, the volume of pigment usage by the automotive industry is of critical importance to the art world by maintaining market demand for quality, highly lightfast pigments. As with many manufactured goods, Chinese production offers reduced costs but with a possible tradeoff in quality and dubious disclosure of composition.  Artist material manufacturers are at the mercy of market forces in their access to raw materials such as pigments, which may be suddenly discontinued. Furthermore, a supply change means months of extensive testing to ensure the newly supplied material meets quality standards for art materials. This is well described by Golden Paints CEO Mark Golden in his article “Manufacturing Artist Paints: Keeping Pace with Change” (GCI Newsletter: Conserving Modern Paints, Fall 2016).

In yet another intersection of art and science, and a rebuke to Kapoor, MIT’s ultra black was utilized by MIT artist in residence Diemut Strebe. Strebe collaborated with Brian L. Wardle, Professor of Aeronautics and Astronautics and Director of necstlab and Nano- Engineered Composite Aerospace Structures (NECST) Consortium, along with team members Luiz Acauan and Estelle Cohen. The resulting installation titled The Redemption of Vanity is a 6.78 carat yellow diamond coated with the new black and presented at the New York Stock Exchange September 13 – November 25, 2019.  In this context, “presented” is not quite the right word since the whole point was the visual disappearance of the brilliant cut diamond.  The symbolic-charged venue of the NYSE venue added a wealth (pun-intended) of meaningful layers of interpretation.

To be clear, carbon nanotube blacks were never destined for the shelves of artist supply stores. Their application requires highly specialized technology, so how should we interpret Kapoor’s deal? I doubt that these ever blacker blacks are discernible to the human eye anyway.  They are designed for aerospace and military applications, and would not work as robust coatings for outdoor sculptures.  Kapoor’s preoccupation with reflections and voids are long-standing, and while I have not personally seen any his black-coated sculptures, I would guess earlier black coatings adequately conveyed his intention. The bad PR for Kapoor opened another gateway for discussions about art and science and more unusually, artists’ rights of access to materials.

P.S.  While many fascating books about colour and pigments reside on my bookshelves, I recommend a 2016 publication The Secret Lives of Colour by Kassia St. Clair, which was a gift from a dear friend Andrea Bowes, a conservator for the Edmonton Arts Council (https://www.edmontonarts.ca).