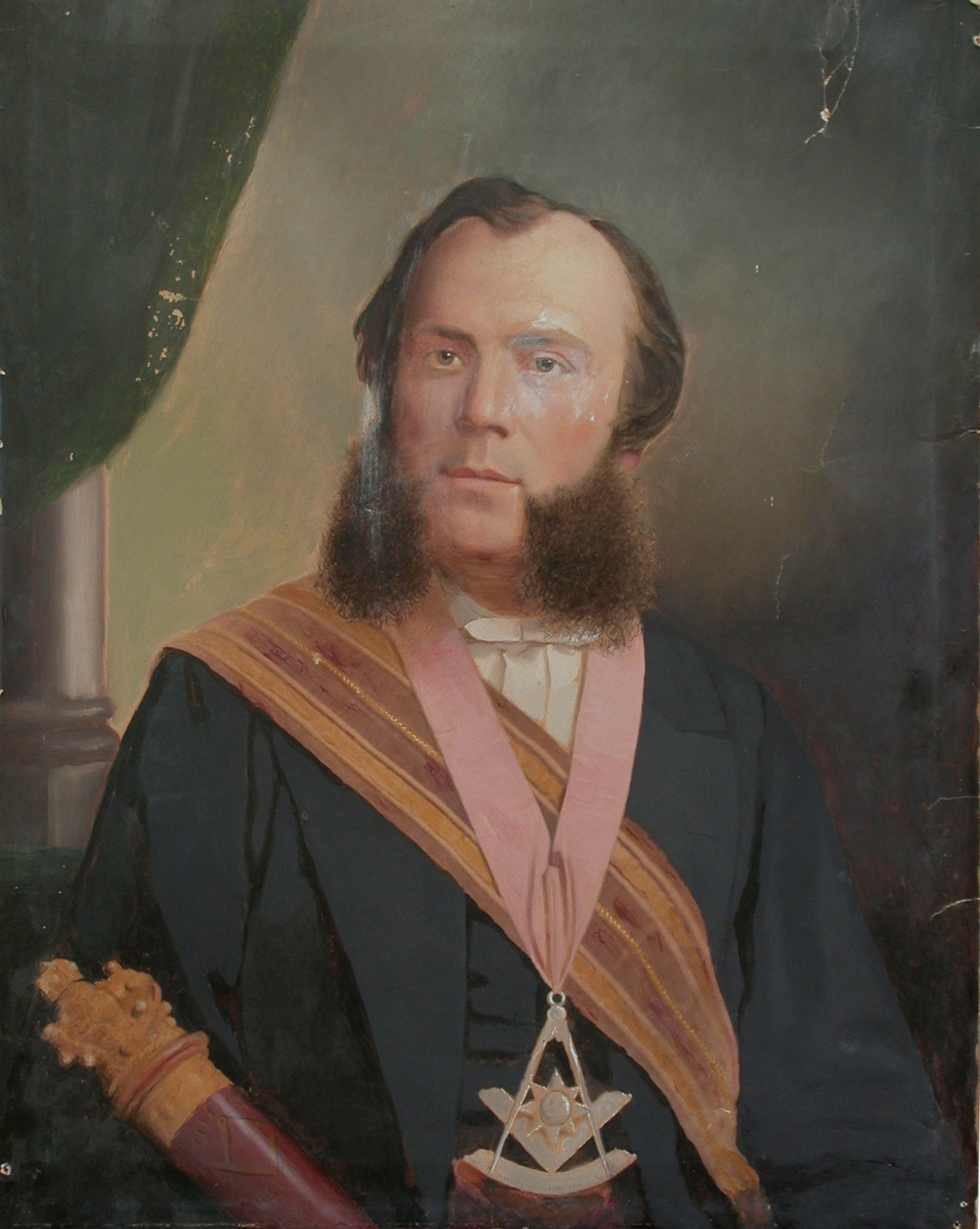 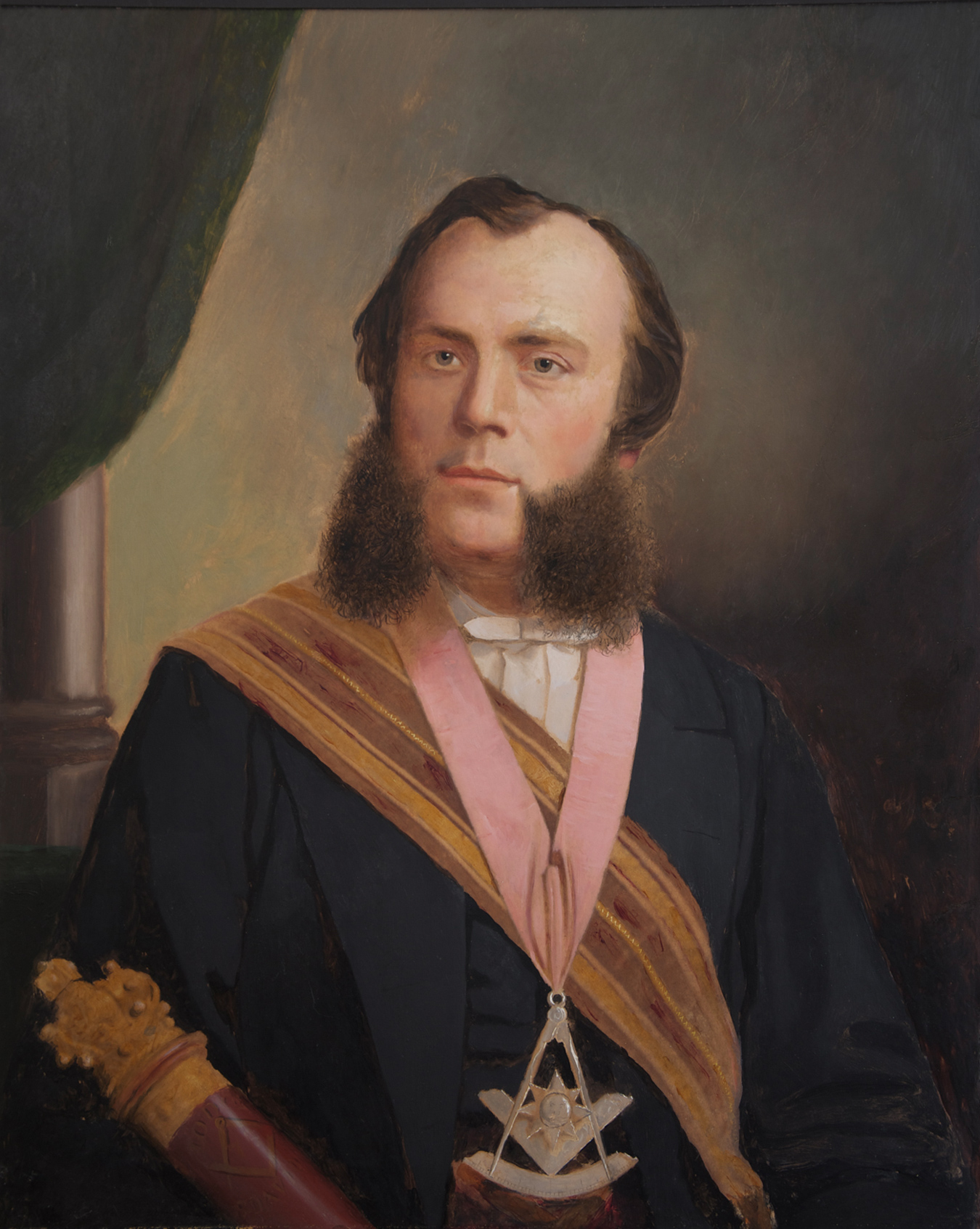 As oil paint ages, becoming more brittle and less able to accommodate movement and distortions in the support. The physical properties of each material layer vary with changes of temperature and relative humidity. Since each layer responds differently, stress occurs and damage may result.

The ancestral portrait of John Willison Hutton, Right Worshipful Master of masonic Lodge St. David 78 (Dundee), 1863-5, was technically unusual, consisting of oil on two layers of paper with a fabric backing placed on a wood stretcher to simulate the appearance of a canvas painting. The fabric backing was degraded and required removal, which also allowed access for treatment of the tears in the paper layers.

The portrait’s treatment included removal of the degraded fabric backing, repair of the tears in the paper support, cleaning, and inpainting of paint losses. 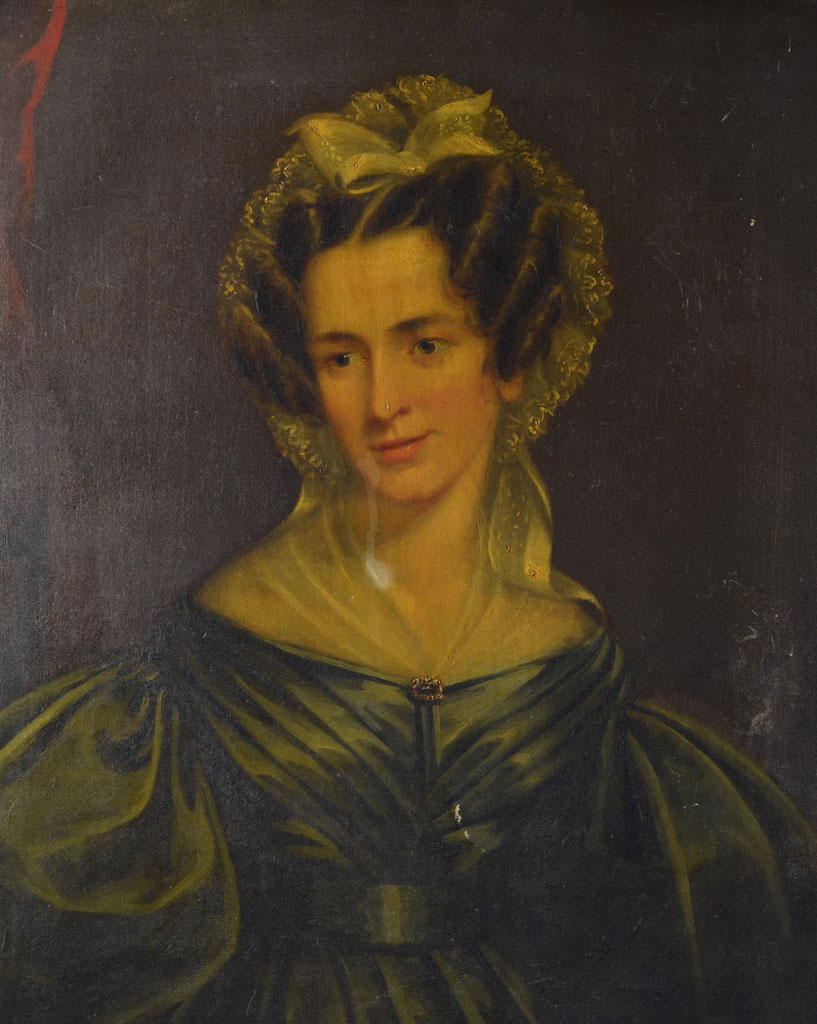 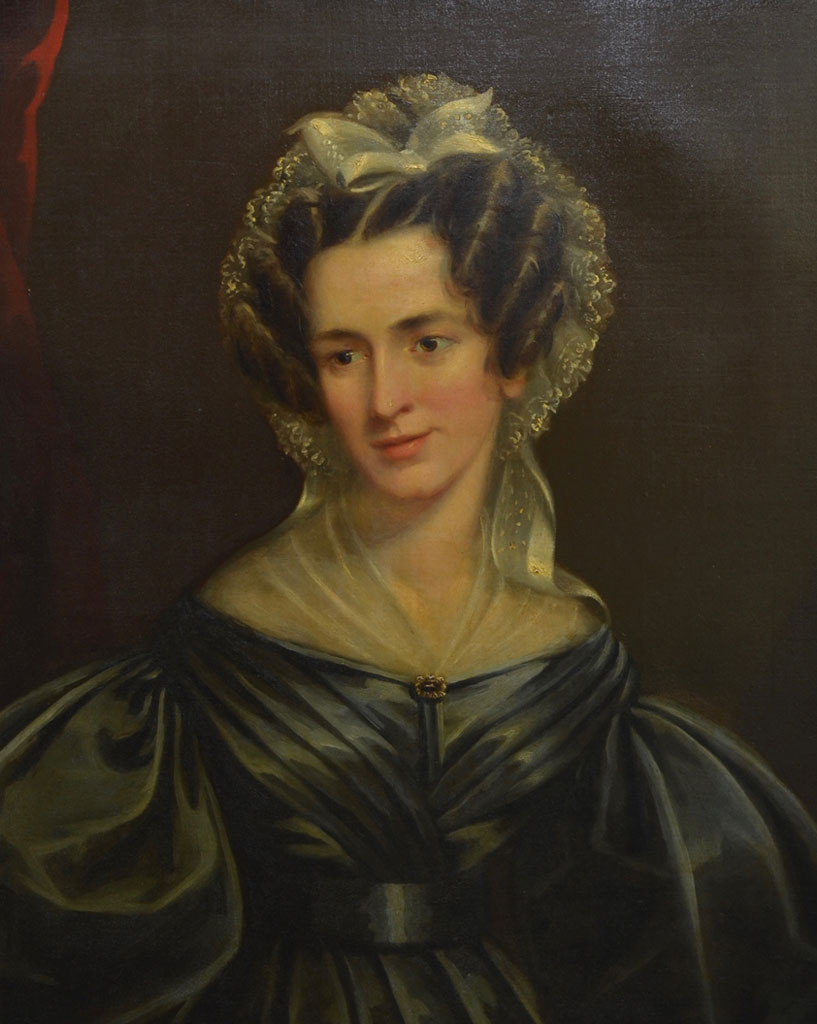 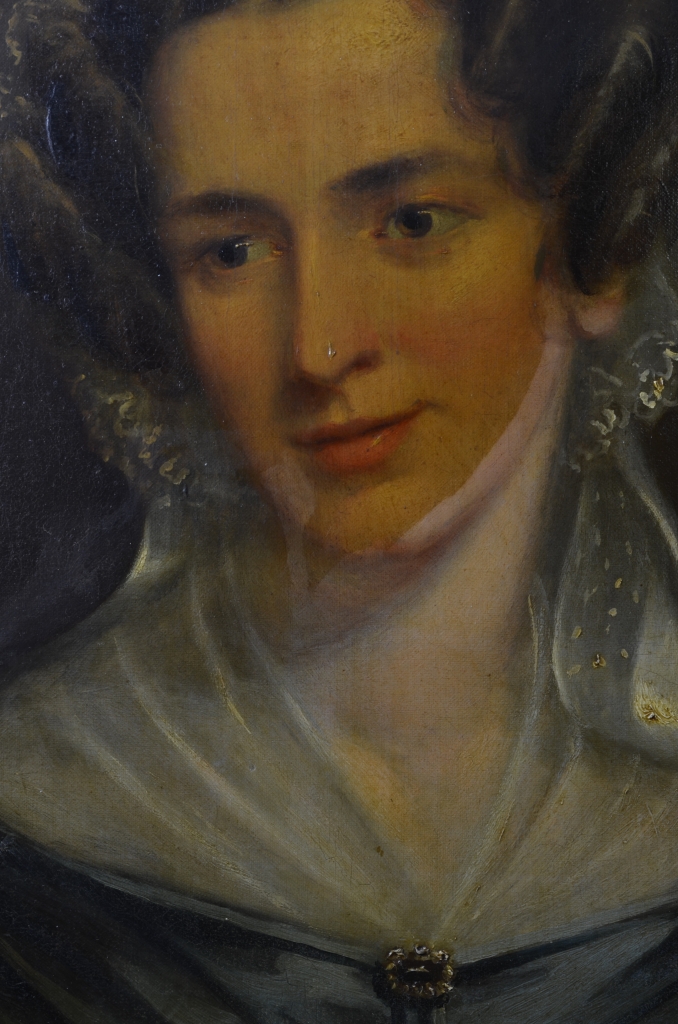 The painter of this ancestral portrait has not been identified but it remains in family ownership. Previous restoration included “lining” (glueing of the painting to a secondary textile support). Complete removal of some mild corner deformation in the stiff, lined canvas was not possible.

Removal of the amber-coloured film was accomplished through surface cleaning alone. Yellowish discolouration may indicate the colour of a a surface dirt layer and/or the presence of a yellowed varnish layer. Paintings displayed in smoking environments frequently develop a yellowish cast as the by-products of tobbacco smoking are gradually deposited on the surface. During examination, the conservator determines the nature and cause of discolouration, and then will advise if surface cleaning or surface cleaning and varnish removal are required. 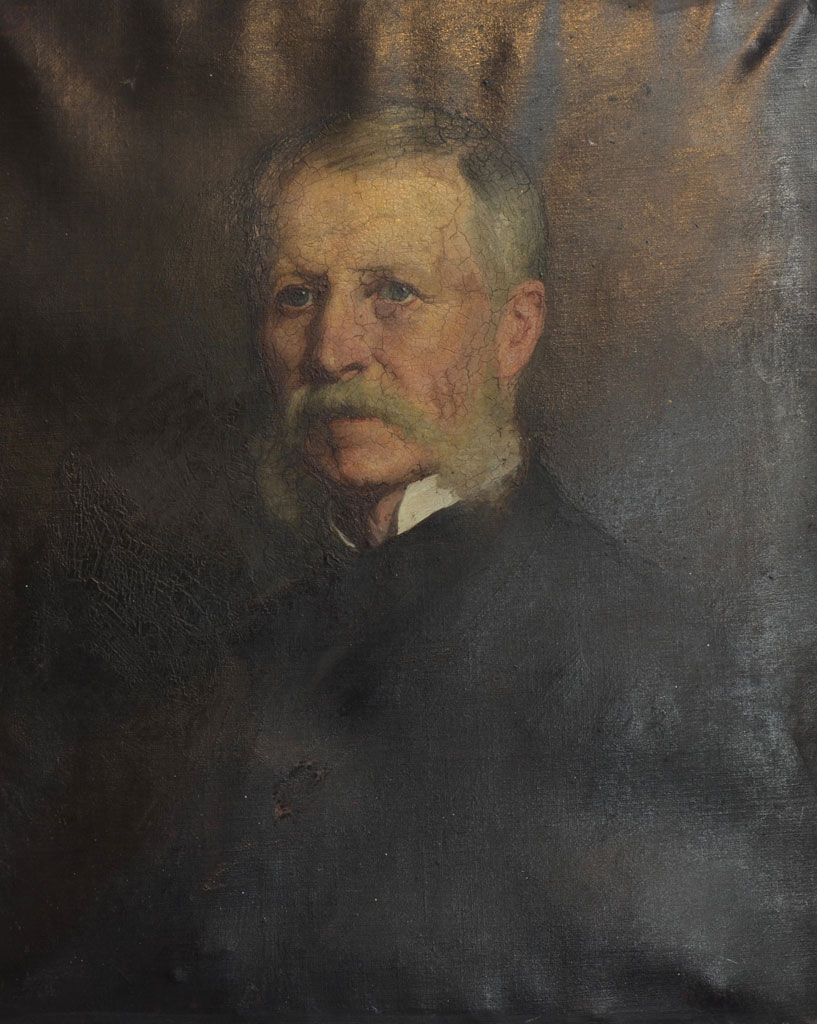 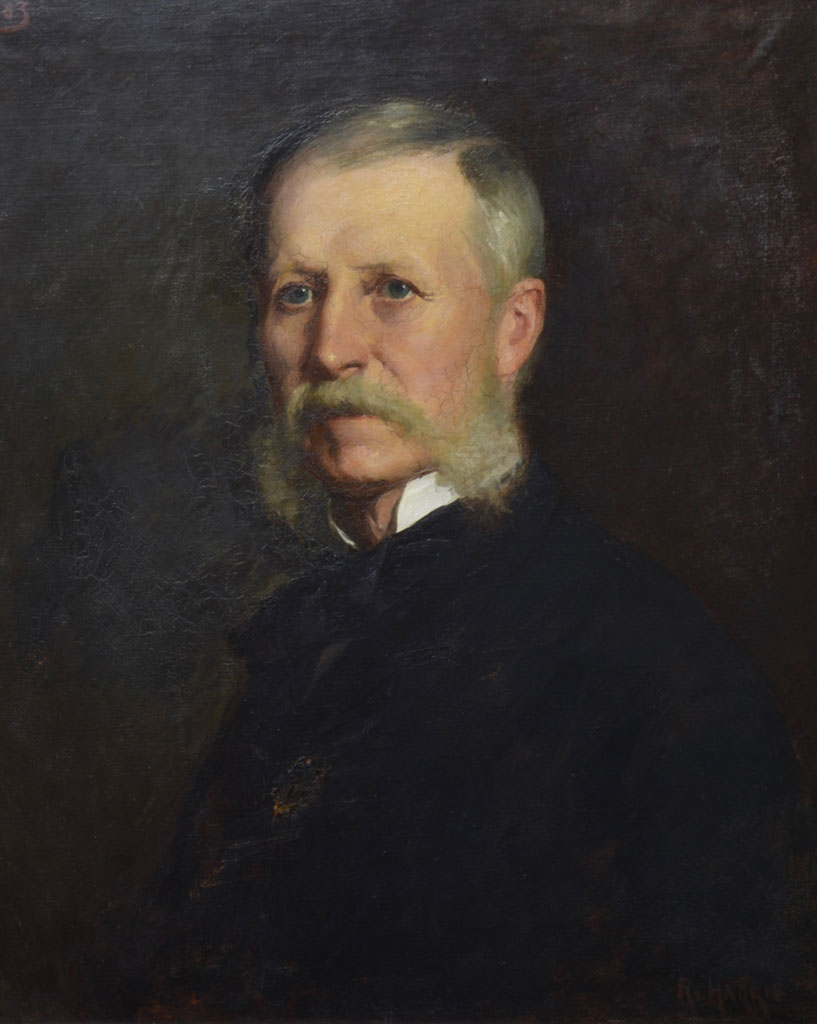 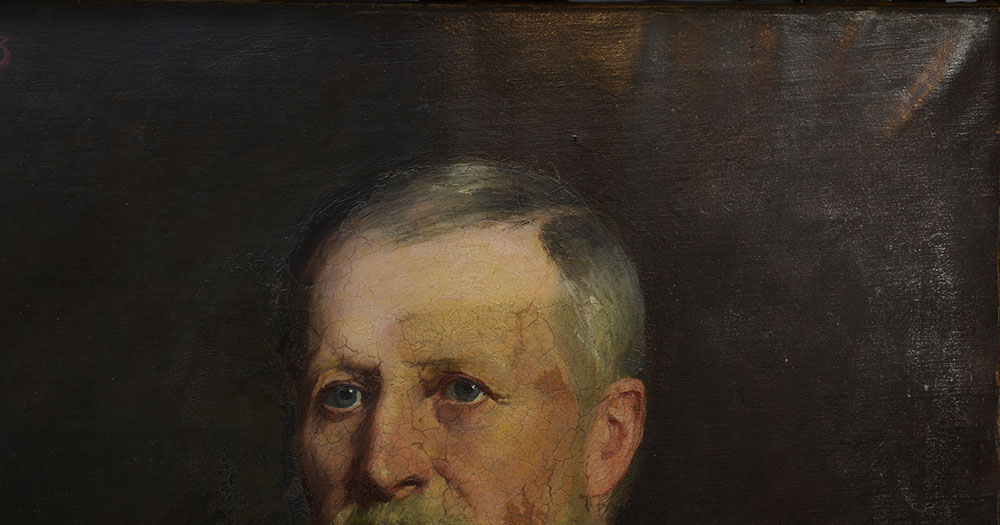 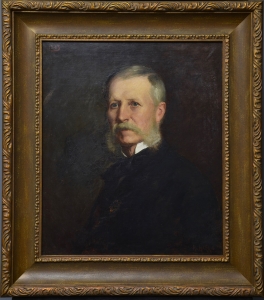 The Davies portrait was created the same year Robert Harris (1849-1919) received the most important commission of his career – painting “The Fathers of Confederation” for the Government of Canada. “The Fathers of Confederation” was lost in the 1916 fire that destroyed most of the original Parliament Centre Block, but the much reproduced image lives on in history texts and in two painted mural copies by Frederick Challener. Benjamin Davies was a prominent politician in Harris’ beloved home province of PEI, the father of PEI premier Sir Louis Davies, and great great grandfather of Lou Hyndman (1935-2013), an esteemed Alberta lawyer and politician.

This project had a myriad of meaningful connections to previous work including my treatment of Frederick Challener’s Fathers of Confederation mural copy in the Fairmont Hotel MacDonald (Edmonton, Alberta). Fortunately it was possible to virtually eliminate the severe canvas draws emanating from the sides after humidification in a specialized chamber. Re-framing was required; the original outer picture frame had been discarded, and the surviving frame slip shown in the before photo had been brutally sanded and twice overpainted. The painting bore evidence of at least two campaigns of retouching and aluminum paint overspray from recoating of the frame.

Harris’ life was chronicled by Moncrieff Williamson, former director of the Confederation Centre Art Gallery in Charlottetown, in the 1970 publication: Robert Harris 1849-1919 An Unconventional Biography. I read the book as I worked on the painting, enhancing my appreciation of this artifact of an iconic Canadian artist’s life journey. 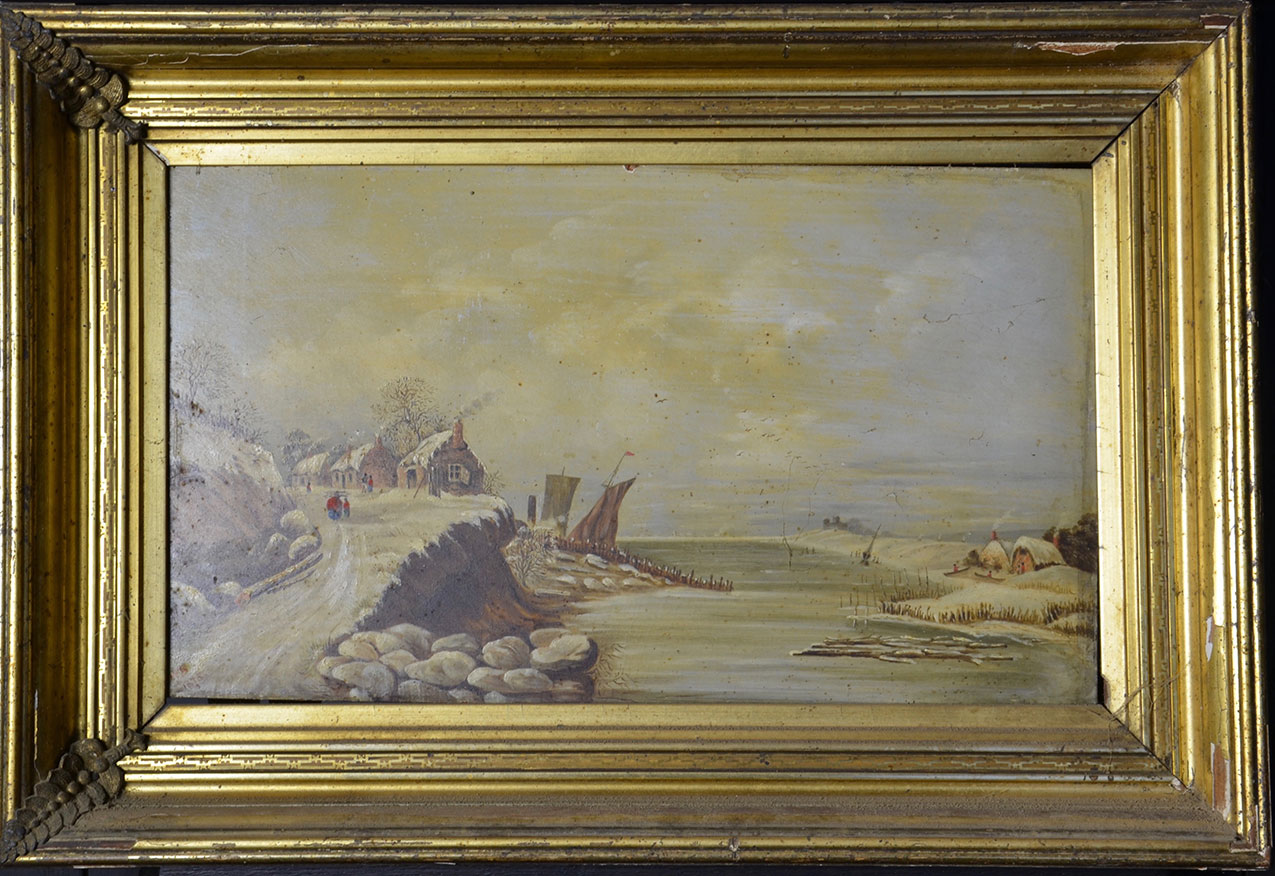 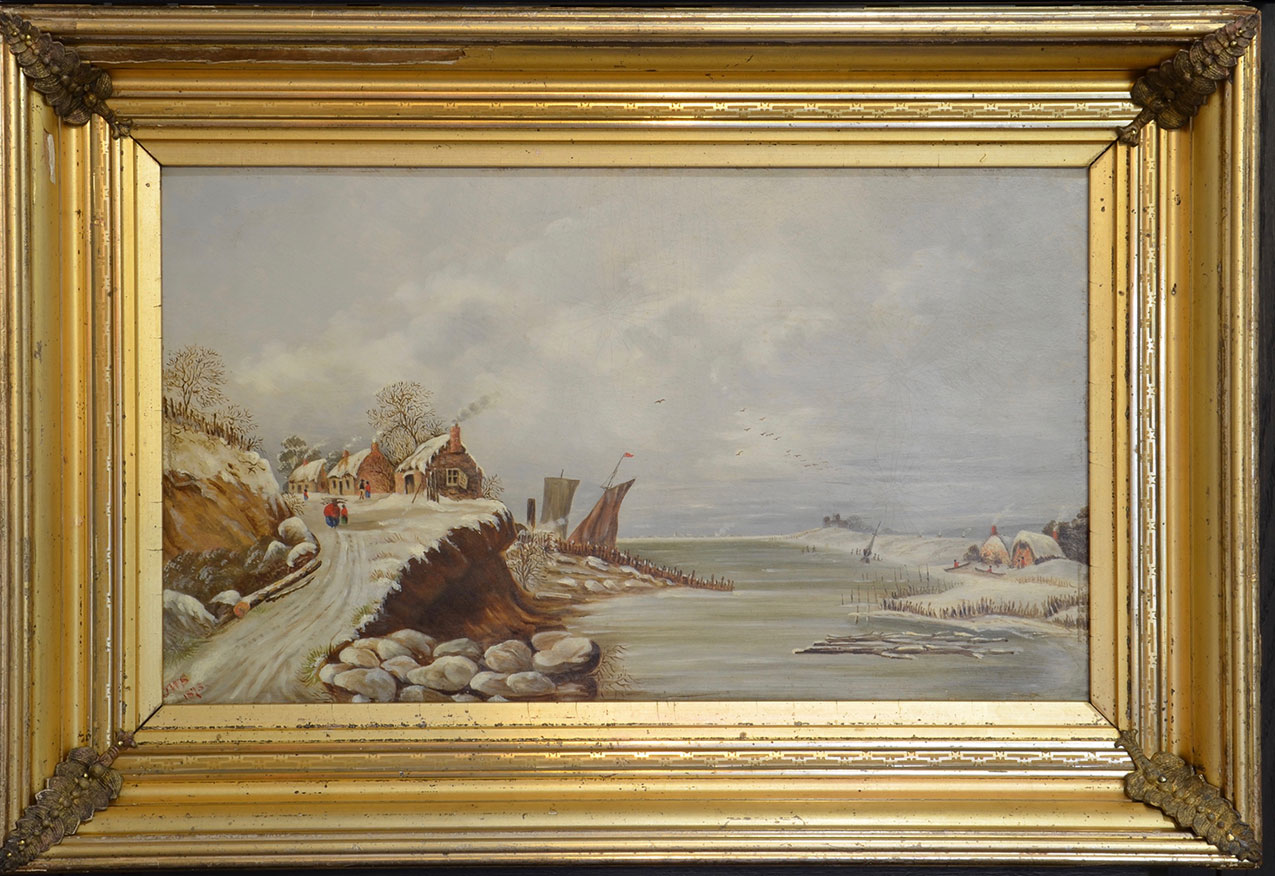 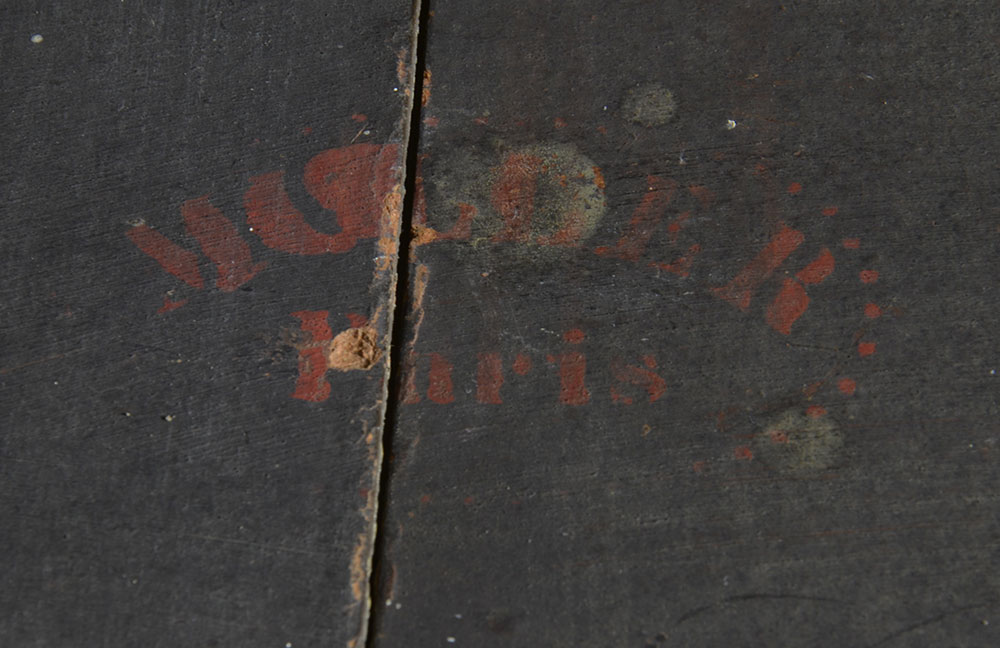 This work and a similar companion piece were painted on cardboard panels cut from one board. The panels had been cut through the middle of a red oval colourman’s stencil on the back; turned over and aligned, the stencil could then be seen in its entirety, but the letters were blurred and difficult to read (as shown in photo). With help from J. Paul Getty Museum conservator Devi Ormond, the stencil was identified as belonging to the firm “Muller” in Paris, 1855-60.

Aside from cleaning and removal of an uneven, yellowed varnish, the project was notable for the conservation treatment of the unique silver gilt frame with metal corner decorations. The corners were gilt metal cast from a lead-based alloy that was soft enough to accommodate the inside curvature of the frame mitres. The frame was likely made in Québec. Missing corners were replaced with new ones cast from silicone moulds, simulating the originals in both appearance and ductility. 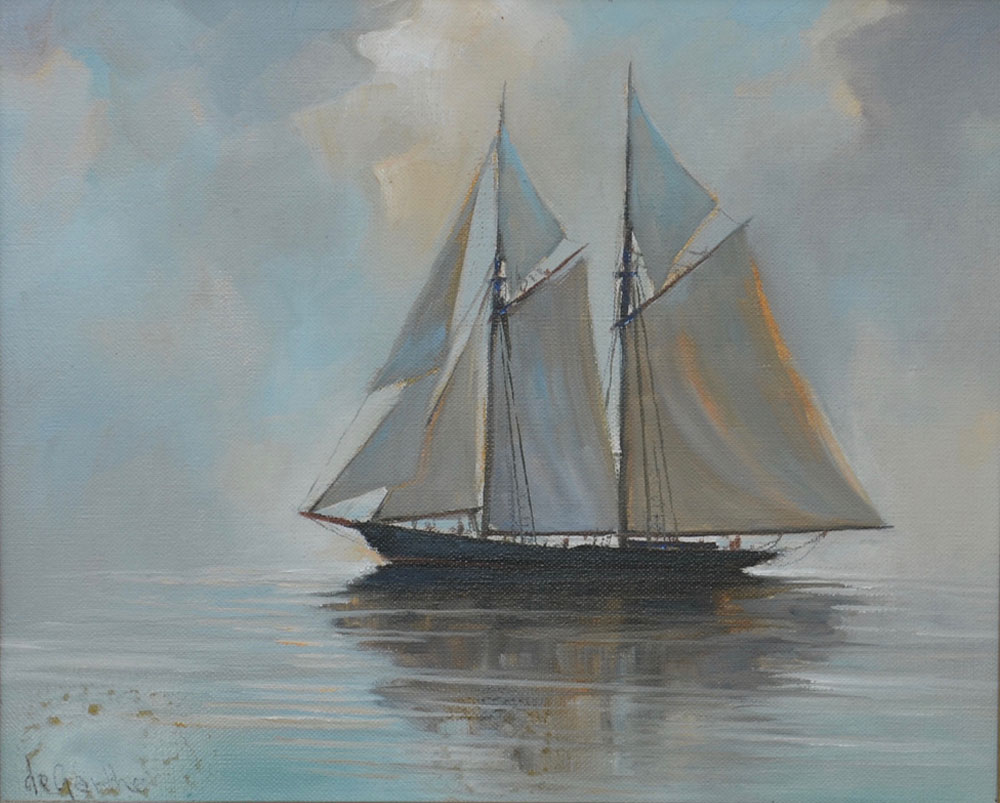 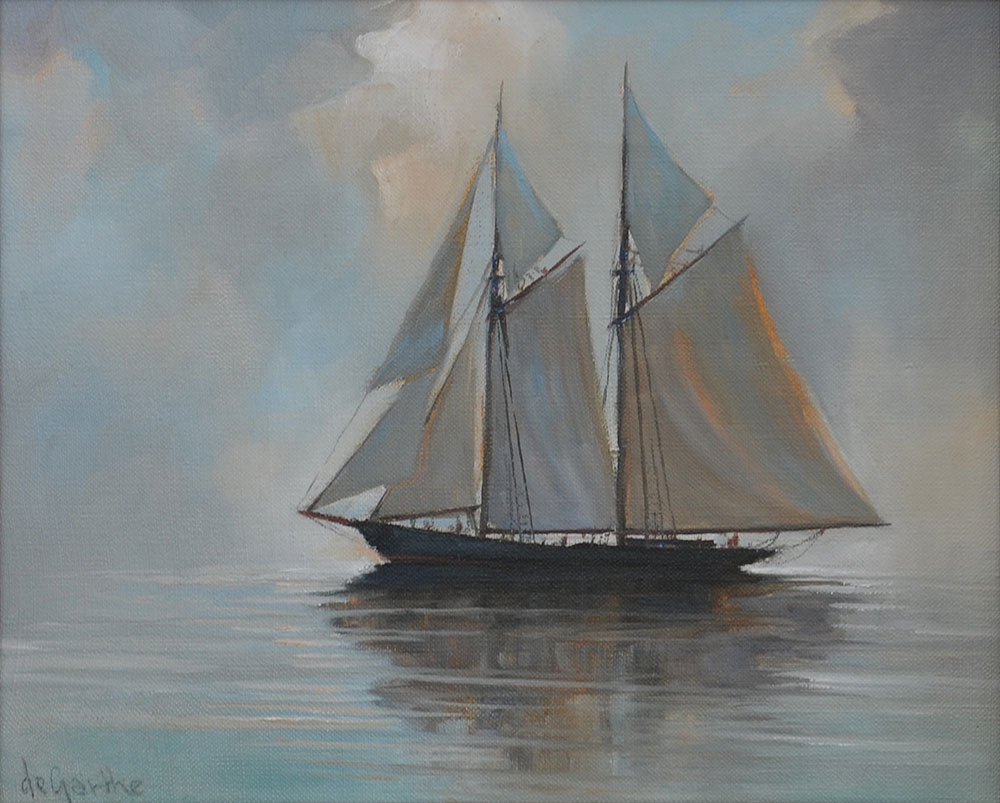 This depiction of the famous Canadian schooner “Bluenose” by William Edward deGarthe was damaged with the accidental application of auto-dispensing room freshener! Treatment involved a determination of the freshener ingredients so that the residues could be safely and completely removed.

As Group of Seven painters had done earlier in the century, DeGarthe worked as a commercial illustrator, even launching his own advertising company.  Awed by Nova Scotia scenery, the Finnish-born artist painted its coastline and taught at the province’s premier art school, now known as NSCAD (Nova Scotia College of Art and Design). 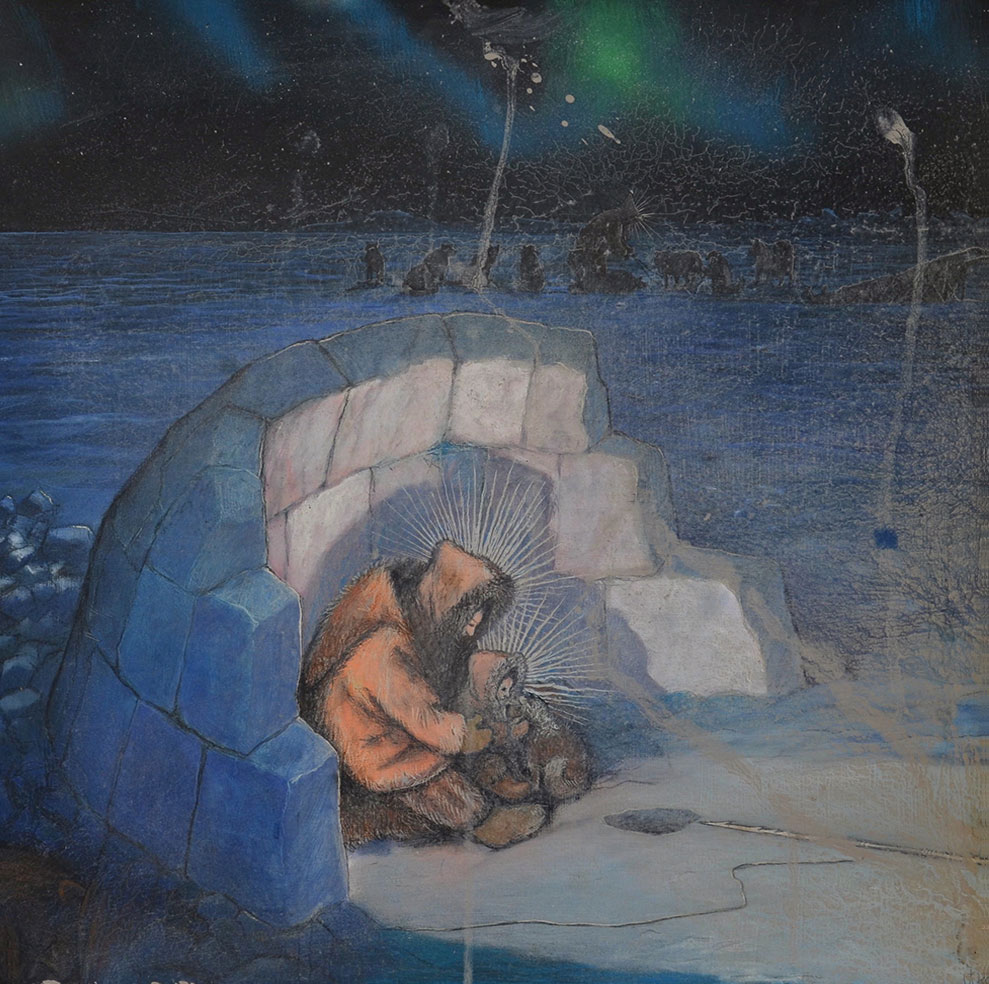 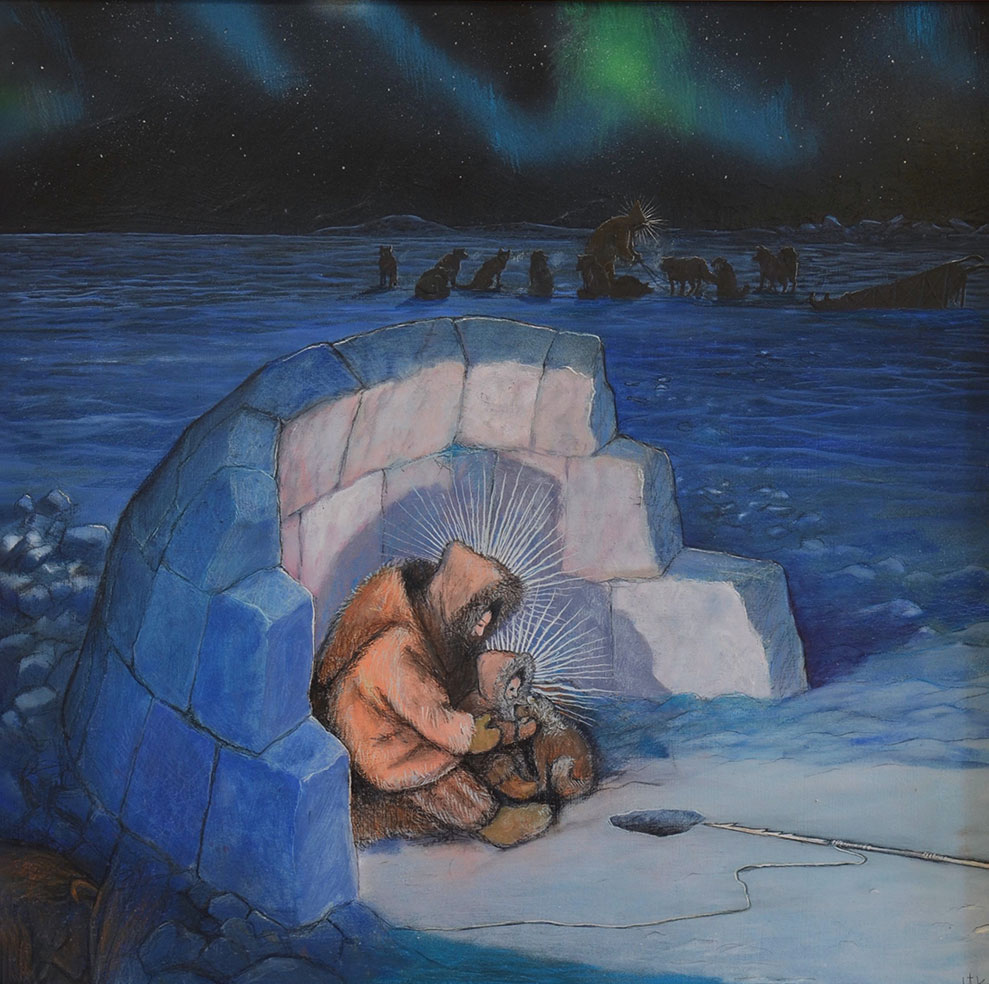 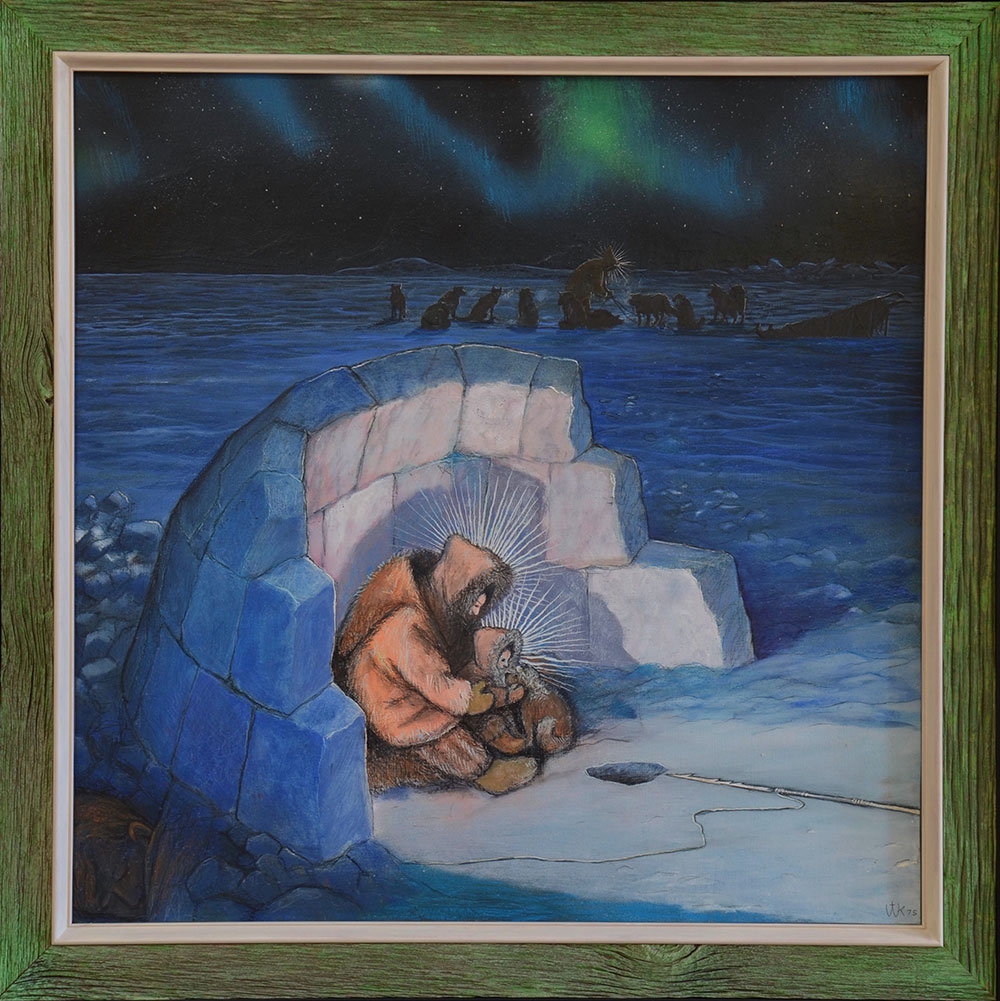 The artist originally titled the work “New Born Doomed to Die.” This painting was reproduced as the cover image for Kurelek’s 1976 Tundra Books publication A Northern Nativity.

Painted two years before his death, the painting became soiled with silt during the devastating 2013 flood in Calgary, Alberta. Treatment consisted mainly of surface cleaning. The green barnwood frame component was retained since it was selected and painted by the artist.

Kurelek’s autobiography Someone With Me published by McLelland & Stewart in 1980, is an unflinching account of his life and development as an artist as well as his struggles with severe depression and